On Monday just gone, I went into the ABC’s radio studios in Melbourne to record for a programme called Poetica. It’s my favourite show on Radio National, and so I was thrilled when they accepted a script from me about the poems that inspired me to make the walk, and the ones that came to me along the road. It was a chance to honour the writers who were my salve, my comfort, my spur and my guides.

I was overcome once again by the way the right words found me when I was in trouble or afraid.

All along the road, they would wing their way to me – poems from all times and places, in all languages. On walls and in bars. In emails from home. From fellow walkers. Even some of my very own, written for me with care and generosity.

So from time to time, I think I will post a poem here. It will be another way of honouring their gifts to me, and something for you to share.

This one came to me early on, and helped me to stare down some very gnarly demons who were insisting I would never make it. That I was not ready, not able, not strong/stable/fluent/brave enough…

The voices may have been right. I probably wasn’t ready.

But if I had waited until I was, I might never have gone.

And this poem helped me to step out.

It’s by Rainer Maria Rilke. Another who loved Spain.

Going far ahead of the road I have begun.

So we are grasped by what we cannot grasp;

It has its inner light, even from a distance­–

and changes us, even if we do not reach it,

into something else, which, hardly sensing it, we already are,

a gesture waves us on, answering our own wave…

but what we feel is the wind in our face. 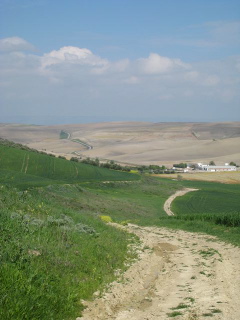 And I can still feel that wind. I still see those hills…